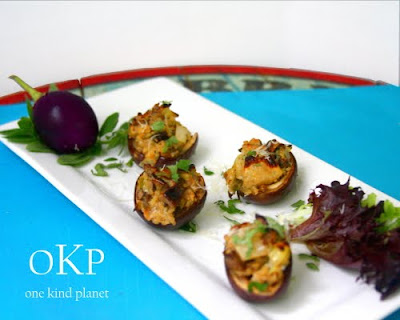 Despite living with farms all around, country living can be the equivalent of cultural deprivation to a foodie--especially during the colder months.  We have an abundance of ethnic markets here in my neck of the woods and they are what keeps me sane by providing otherwise hard-to-find ingredients in rural America.  Our local Indian market carries these adorable little eggplants that I've been dying to do something with for some time now.  I finally picked some up the other day and felt inspired to stuff them.

The result was good enough to serve to company, but since when do you need company (or any excuse) to eat cute little finger foods?  I know I don't, especially when each piece is only 23 calories!  Let's just say I may have eaten about 10 of them in one siting...

One last note, I chose fresh oregano as a flavoring agent for several reasons.  First, I believe it is one of the most under-utilized culinary herbs (and it tastes nothing like the dried stuff in the shaker at the pizza place, trust me).  Second, oregano is ridiculously easy to grow; a member of the mint family, the stuff will take hold of a container and you will never have to worry with it (I planted two plants eleven years ago and have hardly even watered them in that time).  Most importantly, oregano is a nutrient powerhouse that is high in vitamin K and manganese, and has many health promoting benefits; including having anti-bacterial and anti-carcinogenic qualities.  Oh, and if I might add, it makes all sorts of dishes taste really great!

1 - Slice eggplants in half lengthwise.  Using a melon baller or grapefruit spoon, scoop out the insides of the eggplant, leaving a 1/4' of the fruit attached to the skin.

2 - Chop up the parts that you scooped out and sauté in oil, along with the mushrooms and leaks.  Cook, stirring frequently, over medium-high heat until leaks are soft and excess liquid from the mushrooms has cooked off.  Stir in chopped oregano and set aside to cool for a moment.

3 - Place eggplants skin side up on a foil-lined baking sheet and broil, 8-10 inches away from the broiler, for about three minutes to soften.  Be careful not to let them burn (watch closely).

4 - Turn eggplants skin side down on the sheet and divide the quinoa mixture evenly among the eggplant halves.   Return to broiler for 2-4 minutes more, until tops are beginning to brown and filling has set.  Remove from heat.  Garnish with fresh grated parmesan and additional chopped, fresh oregano.  Eat, share, enjoy! 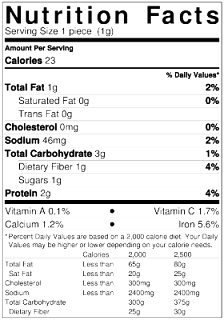 Posted by The Country Tart at 9:59 PM