I Call it ITALIAN LOVE

Often I beg of you to not to call processed snack foods "healthy" and I talk about the difference in healthier junk food and out-and-out junk.  You may wonder, “Why is she picking on my Vitameatavegimin Muffins and Fiber Wonder Bars?” And while I kind of am, I also want you to be sure that when you are checking out the food label, you also look at the ingredient list.

This, dear friends, is my favorite answer to pre-packaged, sugar-laden granola bars. And before you scream about the FAT or CARB levels, I want you to look at the ingredient list and how it would differ from that scary thing above:

Please notice besides the wee bit of natural honey, there are no added sugars. Plus there are no fiber additives (which means no embarrassing fiber-supplemented gaseous emissions). Even better is that of the stats (below) come without the enrichment of vitamins or minerals.

1 – Preheat oven to 250 degrees Fahrenheit. Place Oats and almonds on baking sheet and place into oven for approximately 10 minutes or until fragrant. I do this at a low temperature to keep from completely cooking out all of the beneficial components of the almonds. Set aside to cool.

3 – In food processor, combine dates, prunes, honey and almond butter. Mix til combined and well blended (will look like a goopy ball). Add almond extract and pulse a few more times to incorporate.

5 – Add ooey-gooey wet mixture and use your hands to incorporate this into the oat mixture. Make sure it is evenly distributed. This is where having friends comes in handy as you can make them do the dirty work in exchange for some of the bars!

6 – Place mixture into prepared pan. Use small rolling pin, the side of a glass, or a small flat object to press the mixture firmly into the pan.

8 - Remove from oven and while it is still warm, I use the overhang of foil to briskly and swiftly lift bars out of pan and onto cutting board. Score/cut into ten (or 12) bars but leave it on board to cool.

9 – Place in individual snack baggies and store in fridge. Or, if you happen to have a food saver, you can use the heat crimping function to seal (but NOT vacuum) them into air-tight clear bags and then they do not require refrigeration!

These bars are one of my favorite on-the-go breakfasts and for my friend Stacy, pictured above with the ooey-gooey mess, she calls these bad boys lunch. It’s also not bad broken in have to make a lighter snack. With all that good stuff in there, this is definitely a food to love that loves you back! ~

For additional Country Tart granola ideas, along with more info on the ingredients used (and the thought process behind them) please check out:

and Granola That's Better Than Candy
Posted by The Country Tart at 10:30 AM No comments:

The Kimchi Revelation: Yes YOU Can Make it at HOME! 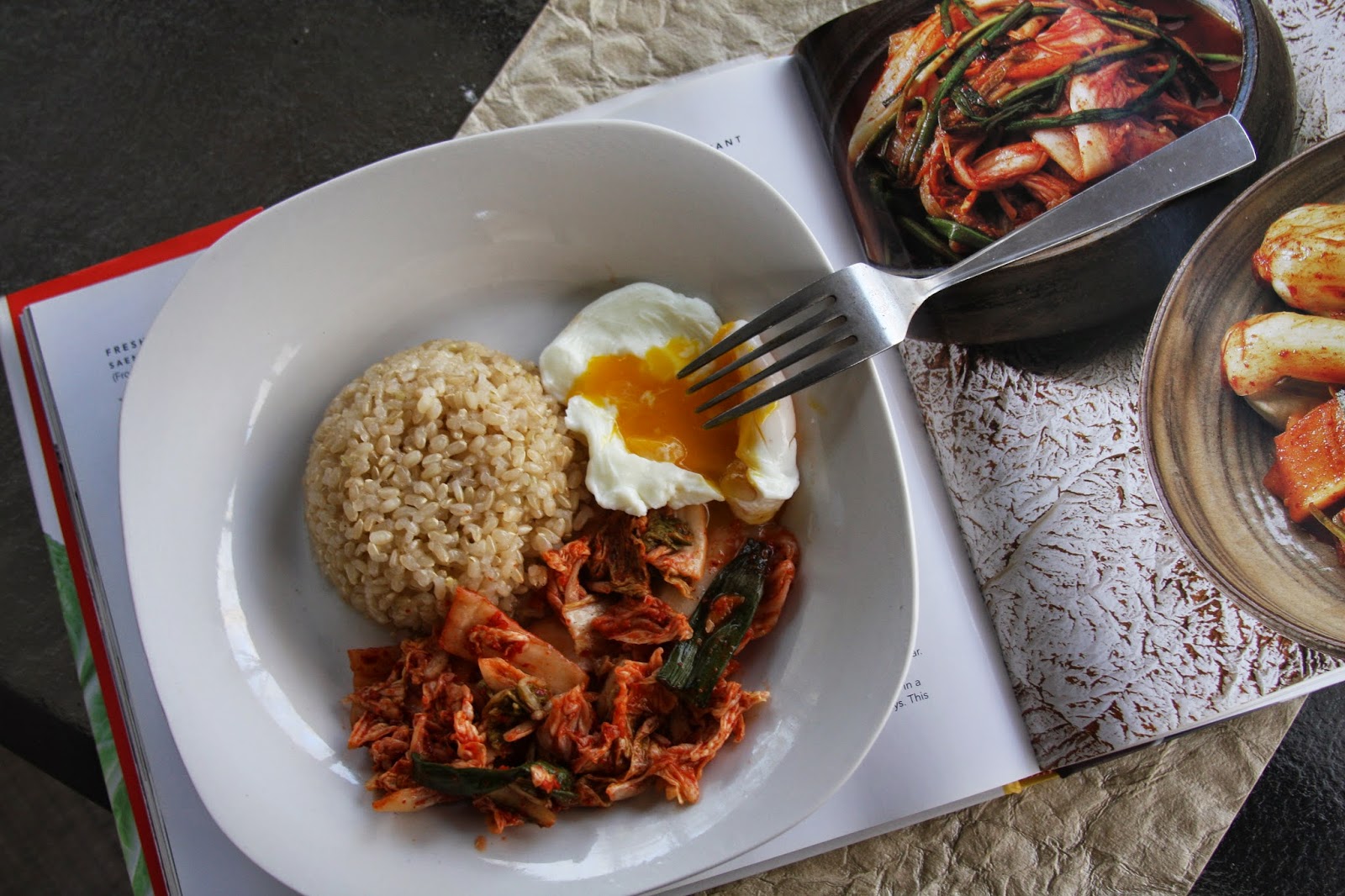 My kitchen counter currently looks more like a shelf in a high school science lab than a food preparation center, as I currently have several different experiments bubbling away in a variety of mason jars. In my book, that’s OK because one of the biggest factors in my personal long term weight management success has been my natural proclivity toward finding new foods and techniques to drum up enthusiasm over. My excitement for discovery in the tasty-healthy food realm is a major component of the magic that keeps me going and coming back for more.

I’ve got probiotic water brewing on my counter alongside my newest culinary obsession of kimchi. Next to that are two containers of soda, one diet and one regular, each containing one of our eldest Tiny Tart Maya’s recently lost canine teeth. Yes, by choice, each twelve hours we remove the decaying brown teeth from their soda bath, photograph, take notes and return them back to their dismal swamp. I shall spare you the details at this time, but will, at a later date, share the grizzly particulars that result when one allows their teeth to dawdle in a sea of soda pop. Anyway, you came here to read about kimchi.

Since I have been eating less and less dairy (which means less yogurt and a less happy gut), I have been eating more and more kimchi. Kimchi is a spicy fermented cabbage product that could probably be tagged as the official national staple of Korea. Delicious alone or alongside Korean barbequed beef (known as bulgogi) and sticky rice, it is micro-organism rich and, as such, does the digestive system good with its probiotic awesomeness. Purchasing it every several days in $9 jars was costing me a pretty penny; my brilliant husband made the suggestion that I should be making my own. Since it really doesn’t take much prodding to encourage a woman who will willingly decay teeth on her counter to try her hand at fermenting cabbage, I decided the time had come to give kimchi making a whirl.

In my college years, I shared an apartment during the summer sessions with a friend whose mother made Kimchi by the five gallon bucketful, literally. And she buried said buckets in the backyard for months at a time. Though I’ve had a kimchi cookbook in my possession since sometime in the mid-nineties, observing my friend’s mother make the stuff has intimidated me for nearly twenty years. It must have been the sheer quantity she handled because once I finally got past the initial fear and actually took the time to read a recipe, or two, instead of just look at the pretty pictures, I realized I was being ridiculous. I headed to my local Korean grocery and talked to the owner. I scoured the internet for additional recipes. I rolled up my sleeves and got to work.

What can I say? I am stubborn. Sometimes it takes me years to follow through with an intention. Of course, once I do, I realize that like anything tripping me up in life, anything is easier to overcome if I can just take a single step. After chopping the cabbage and weighing it down to drain for a day, I threw all of the ingredients together for the first batch in mere minutes; after that I let the lovely bacteria that lingers in my living space do the rest. Two days on the counter and it tasted just like the stuff I’ve been paying a hefty price for. I always love it when I realize I can exert little effort, save money and get results like this.

After making my first batch, I realized that I could play around a bit. Really, anything can be fermented (seriously, you should see some of the fermented vegetables and fish in my book!). So far I’ve reduced the salt significantly. Since I've been spending a lot of time in our local Korean market, I've gotten pretty friendly with the owner who has been more than helpful in providing ingredients, tips and pronunciation advice. In my next attempt I plan on shredding some Korean radish and Asian pear into the mix, as my new friend Sunny has suggested. Also, the spiciness of the end product can be left to your discretion; my first batch was less red, and thus, less spicy. In my second batch I added quite a bit more of the chili powder or gokchu garu.

Many of the recipes I have found call for first brining the cabbage in a salt solution so I was very excited to find David Lebovitz’s adaptation of it, where the cabbage is instead sprinkled in salt and then pressed in a colander to help express some of the liquid out of it. I’ve since learned from an NPR interview with Sandor Katz, whom a colleague of mine refers to as the leading authority on fermentation, that the salt can be reduced significantly as the use of it is “more to taste.” I still used about 1 ½ tablespoons in my latest batch, which was nearly double in sized to what is called for in the recipe below, due to the fact that the last cabbage I picked up was gi-nor-mous.

When you factor this into your daily food log, take note that I listed more salt in the nutrition label than is most likely actually there, just to be on the safe side. I am still eating 1/3 – ½ a cup of this stuff every day and my salt intake has been mostly on the greener side of life. This version is vegan, though many of the recipes do call for fish sauce. 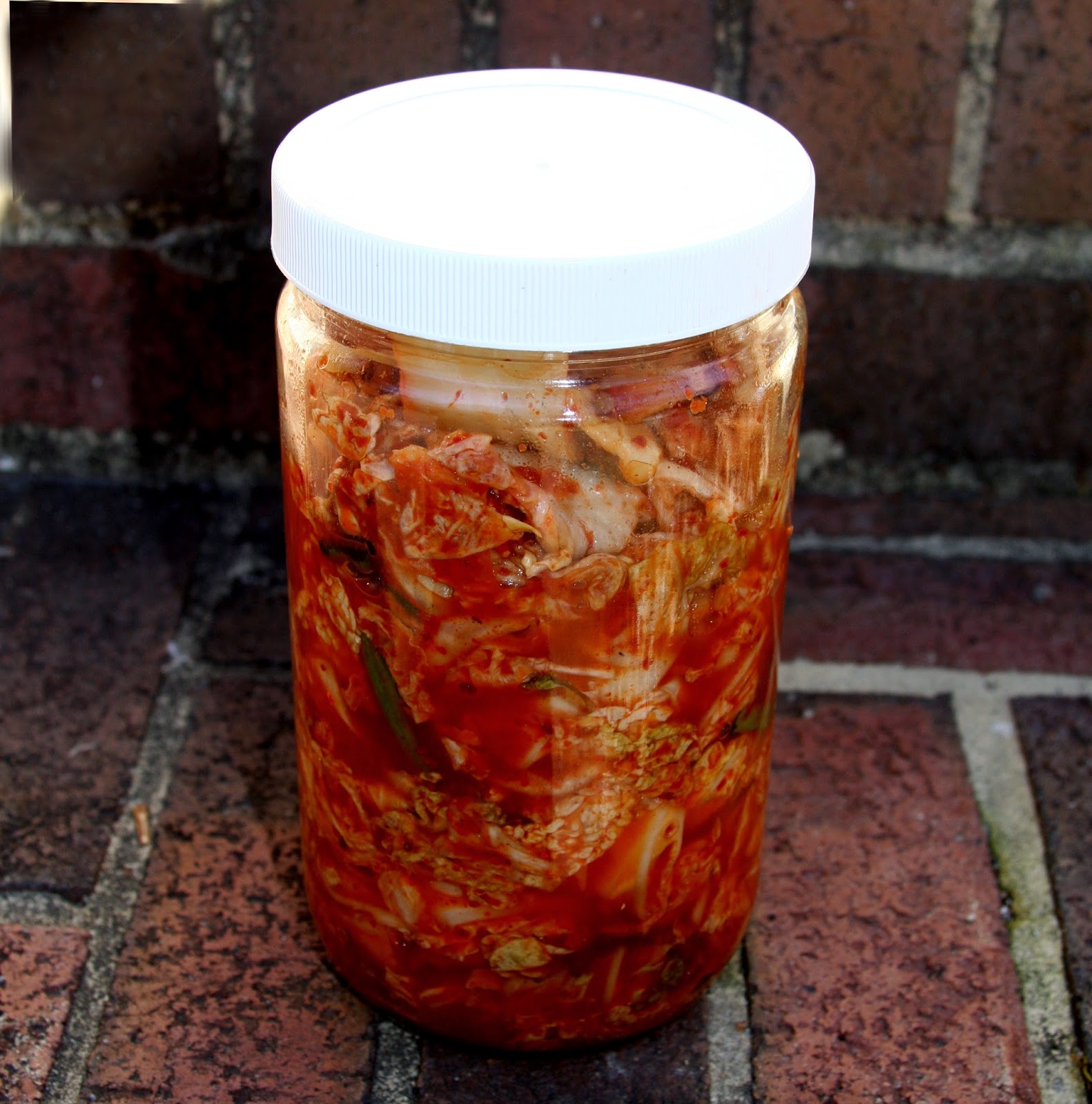 1 - Remove the tough and/or dirty outer leaves of the cabbage and slice it lengthwise in half. Remove the core.

2 - Cut the cabbage into 2-inch pieces. Toss the cabbage with the salt in a large bowl, then transfer it to a non-reactive colander. I use a ceramic coated but plastic is fine also. I steer away from metal anytime a recipe calls for nonreactive, even though stainless is technically nonreactive. Set a plate (or several—I used four!) on top then weigh it down with something heavy for 24 hours.

3 - Mix together the vinegar, chili paste, garlic, chili powder, and ginger in a large, nonreactive bowl.

5 - Pack into a jar, cover tightly, and let stand at room temperature 48 hours, then move to a “fermentation slowing device” or refrigerator, for those of us who don’t bury buckets in their backyard, for 24 hours before serving.

Per each generous, 1/3 cup serving: 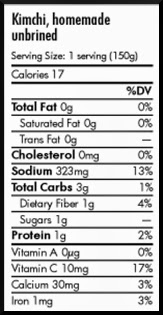 * I had great results even when I limited the salt to 1 1/2 tablespoons on a much larger cabbage. Play around a bit!

I feel compelled to warn you, if you are anything like me then this fermented food/kitchen science experiment thing might become mildly addictive. Joe has been avoiding kimchi since I cracked the first jar I brought into our first shared apartment eighteen years ago. Now that I am making it, guess who has developed a taste for it? I have also learned that if I roll it into sushi paper (Nori), with sticky brown rice and creamy avocado, my Tiny Tarts will gladly gobble up several pieces of it. I have to confess that this treatment has also become one of my favorite afternoon snacks as well. Some days, I will take this “kimchi sushi” along for a lunch on the go.

Throughout history, so many of the foods that we have most showered with love and adoration are those that are fermented: cheese, wine, certain breads, and even chocolate. Additional foods, such as sauerkraut, yogurt, miso and sprouted grains, have also been cherished for their health-promoted qualities. Even if you are not ready to embark on your own home fermenting adventure, there are plenty of fermented foods you can purchase, as mentioned above.

Personally, I am a huge fan of kimchi, even more so now that I can make it at home. With all the gut-happy beneficial bacteria and the added element of new food discovery, noshing on some kimchi is a wonderful way to love the foods that love you back.~