Discovery of the Week: Pummelo Fruit 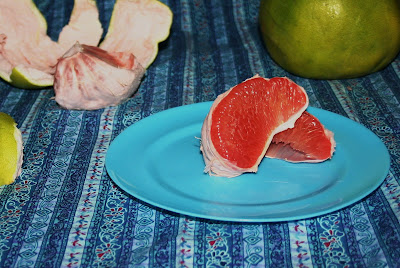 One of the brighter apsects in the otherwise dreary produce sections during the winter time is citris fruit. I get excited when I begin seeing clementines and blood oranges in the store. My children do too, as we cannot seem to keep a box of citris fruit in the garage for more than a few days.

I've seen pummelo before and always just assumed it was an over-priced and green grapefruit. If it weren't for the reduced, Not the Best but Still a Good Buy, sticker on one of these suckers, I'd still be in the dark. But, as it happened, I bought one for 86 cents (who comes up with these prices?) and it is delicious. I've actually been back to buy two more.

Peeling it was more like a science experiment than food prep as it is covered with a thick, fragrant pith that has a perfumy but exciting scent. It smells so refreshing, in fact, that my daugther and I continued to sniff the peel as we were eating it. The flavor is much like a grapfruit only less tart and much more perfumy.

Once the outer peel has been removed, the segment skin must also come off; leaving it looking much like a naked, enlarged blood orange, except that the revealed jewels are so large that they reminded me of pomegranate seeds. Not that they taste anything like pomegranate, but the little jewels would be beautiful sprinkled over salad or even atop a citris cake.

Whenever food needs to be brightened, I shave a bit of lemon or lime zest into the dish and instantly the flavor is lifted. I have done this with grapefruit which is also really good so why not pummelo? It was zested into the red quinoa that served as a bed for my grilled albacore steaks a couple of evenings ago. What a memorable meal. The pummelo gave dinner an almost exotic feel. 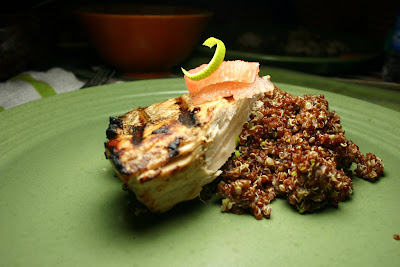 Above, grilled albacore steaks with pummelo red quinoa.
Posted by The Country Tart at 12:17 AM 1 comment: